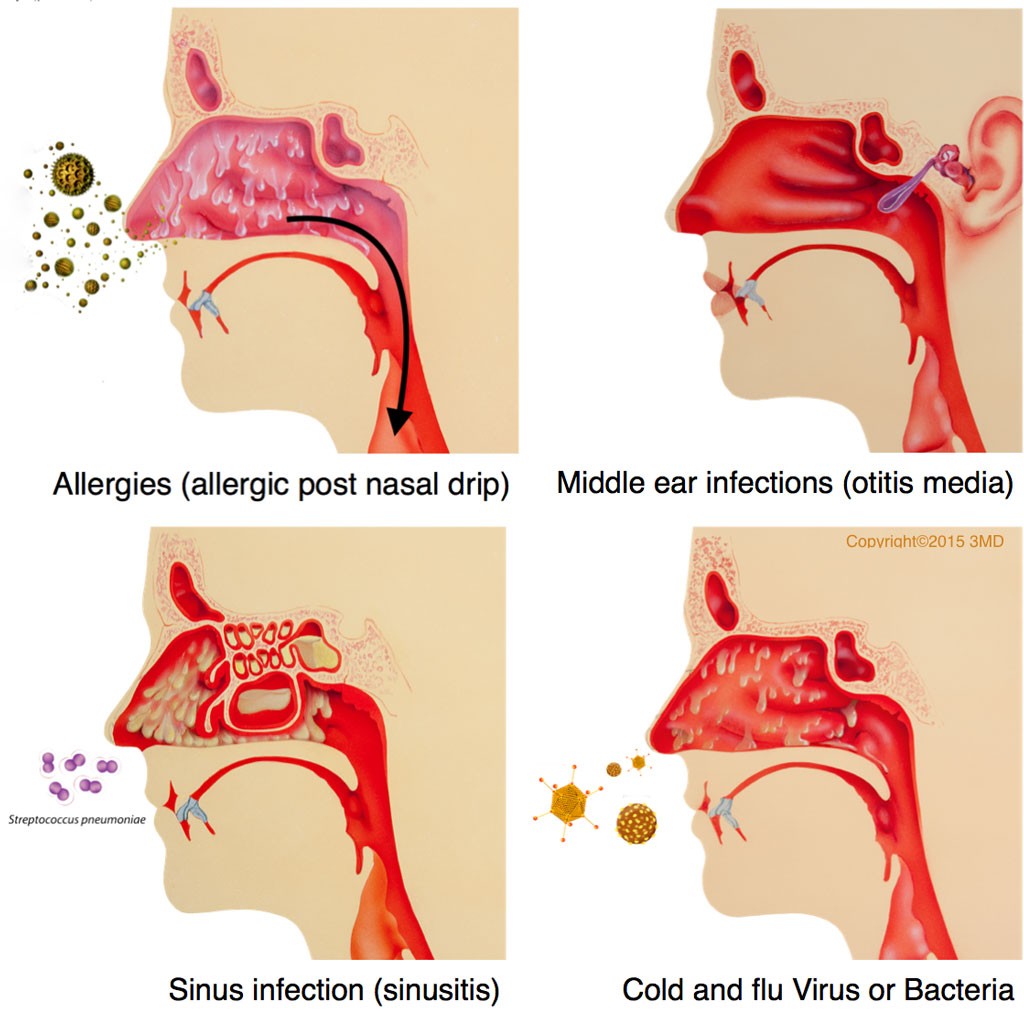 Causes of Postnasal Drip in children

Postnasal drip in children can be caused by a number of factors. The most common include: 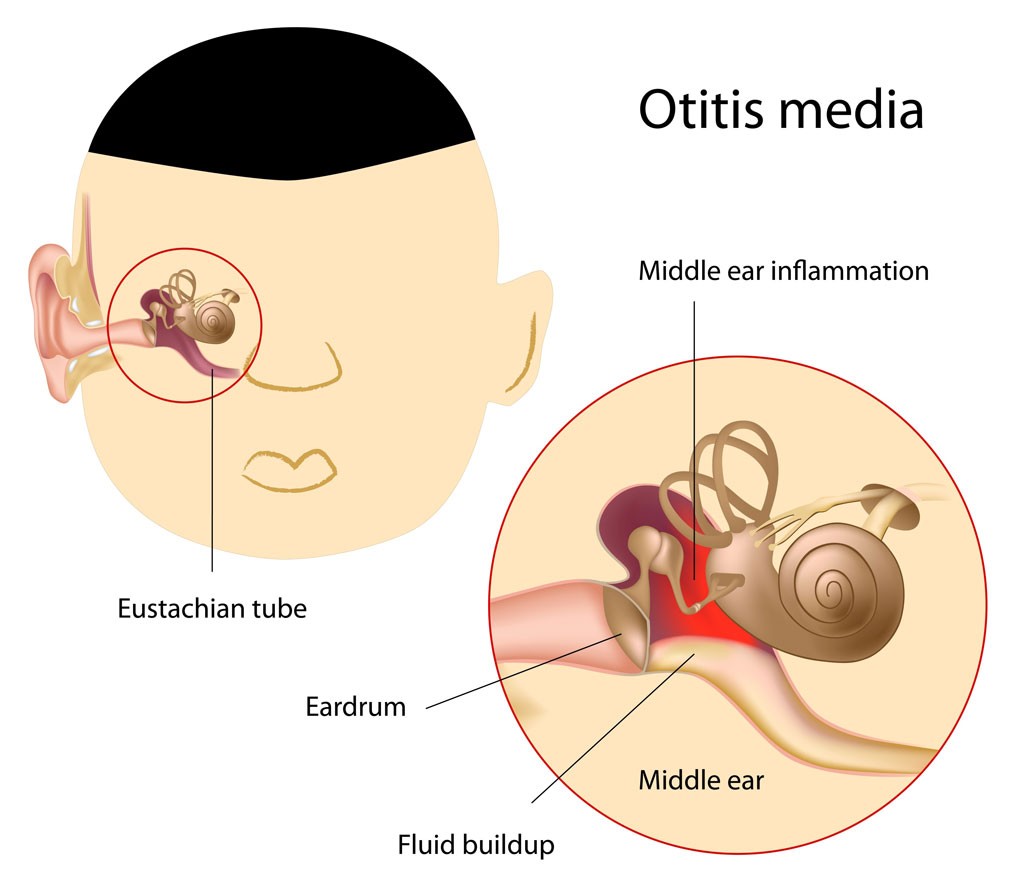 Otitis media can be acute or chronic. Typically acute otitis media (AOM) clears up on its own or after a course of antibiotics. Often however, medication is needed. Your child’s doctor will likely prescribe antibiotics, which are extremely effective in fighting ear infections. Typically these mediations are taken for 7-10 days along with Ibuprofen or acetaminophen for pain. If the ear infection does not respond to antibiotics or if more episodes of acute otitis media occur, surgery may be recommended. Your child’s doctor may recommend removing the adenoids if they are enlarged or infected. Your child’s doctor or an ear, nose and throat specialist may also suggest ear tubes, which are tiny tubes surgically inserted into the ear to allow for better airflow and function of the eustachian tubes. 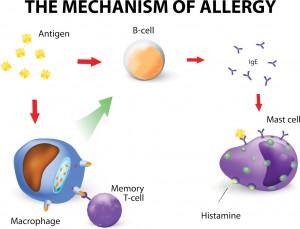 results when the immune system over-responds to specific particles with a protein structure often found in pollen, mold, plants, animal hair, dust mites, insect venom, food and chemicals. During an allergic reaction antibodies specifically attach to mast cells in the skin, lungs, and mucous membranes causing the release of histamine. Histamine opens the blood vessels and causes swollen membranes. Sneezing, congestion and postnasal drip are often the result when this happens.

Treatment for allergic postnasal drip addresses the underlying cause, allergies. Antihistamines, which block the release of histamines during allergic reactions, are extremely effective. Nasal steroid sprays are used to reduce swelling and inflammation of the nasal passages promoting proper drainage.  When symptoms don’t improve, allergy shots (immunotherapy) can gradually reduce the immune system’s response to a specific allergen resulting in fewer or less severe symptoms. 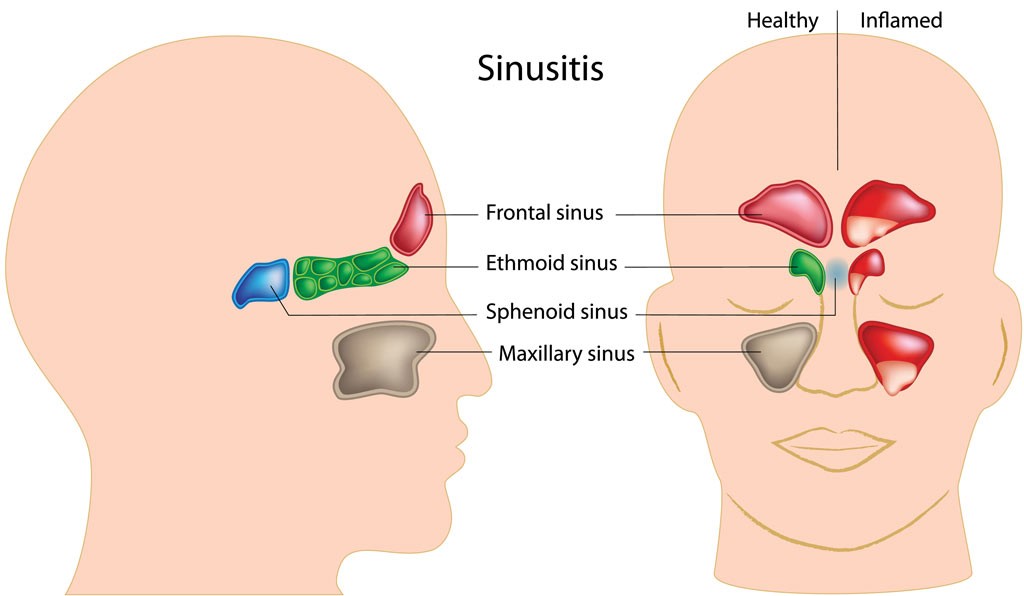 Sinus infections (sinusitis) in children occur when tissue lining of the sinus cavities becomes swollen and inflamed. Because a child’s sinuses are not fully developed until the later teen years, sinusitis can easily develop. A runny nose, cough, sore throat, fever, yellow drainage and headache are all common symptoms of sinusitis in children. Because the membranes are swollen and thick mucus may block nasal passages during a sinus infection, postnasal drip is often a complication of sinusitis in children.

Nasal foreign bodies are most commonly seen in children 6 months to 5 years of age. An object inserted into the nose can block proper airflow and drainage. Any obstruction in the nasal cavity can be a source of discomfort and can make things like eating, breathing, speaking and sleeping difficult. The blockage can cause swelling leading to further complications like nasal congestion, mouth breathing, sleep apnea and postnasal drip. In most cases, removing the object alleviates the symptoms for the child. Depending on the location of the NFB, it may be removed in a doctor’s office or require surgery.

Board certified pediatric pulmonologists; Dr. Peter Schochet and Dr. Hauw Lie are dedicated to the care of infants, children and adolescents with acute or chronic respiratory disorders like recurrent pneumonia.

About Pediatric Pulmonologists: Pediatric pulmonologists Dr. Peter Schochet and Dr. Hauw Lie, are dedicated to the care of infants, children and adolescents with acute or chronic respiratory disorders. Our highly knowledgeable staff provides evidence based medical care to patients from the Plano area and throughout North Texas. Our practice has a … END_OF_DOCUMENT_TOKEN_TO_BE_REPLACED

Dr. Schochet's interest in diving has led him to assisting young divers with asthma. He understands that divers with asthma are more prone to diving mishaps. This is why it is important for asthmatics to have their medication regimen evaluated and have physical exams prior to going on diving trips. Although he doesn't treat diving illness, he is an … END_OF_DOCUMENT_TOKEN_TO_BE_REPLACED

The prevalence of pediatric asthma has leveled off except amongst the poor children.  The overall … END_OF_DOCUMENT_TOKEN_TO_BE_REPLACED