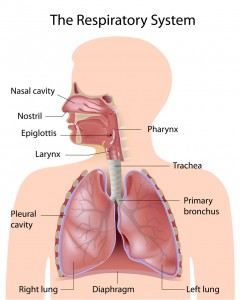 The anatomy of a child’s lung is very similar to that of an adult. The lungs are a pair of air-filled organs consisting of spongy tissue called lung parenchyma. Three lobes or sections make up the right lung, and two lobes make up the left lung. The lungs are located on either side of the thorax or chest and function to allow the body to receive oxygen and get rid of carbon dioxide, a waste gas from metabolism. To understand the anatomy of the pediatric lung and lung disease in children, it is important to take a look at the entire respiratory system.

The anatomy of the pediatric respiratory system can be divided into 2 major parts: 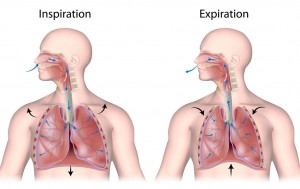 Breathing is the process that moves air in (inspiration) and moves air out (expiration) of the lungs through inhalation and exhalation.  As the lungs expand and contract, oxygen rich air is inhaled and carbon dioxide is removed. Breathing begins at the mouth and nose where air is inhaled. The air travels to the back of the throat, into the trachea and then divides into the passages known as the bronchial tubes. The bronchial tubes continue to divide as the go deeper into the lungs and the air is carried to the alveoli. Oxygen passes through the walls of the alveoli and into the blood vessels that surround these tiny sacs. Once oxygen enters the blood vessels, it is carried out of the lungs and to the heart where it can be pumped throughout the body to other organs and tissue. When the cells use oxygen, they produce a waste product called carbon dioxide. The carbon dioxide is carried by the blood vessels back to the lungs. Through exhaling, the carbon dioxide is carried back out of the lungs where it can exit through the mouth or nose. 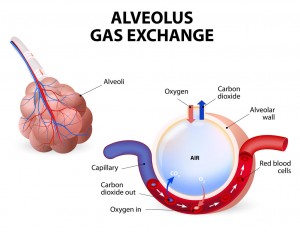 While the basic anatomy of the pediatric lung and the adult lung are the same, there are some important differences that should not be overlooked. These differences can increase the occurrence and severity of lung disease and respiratory issues in young children and impact treatments and techniques that are most effective.

The anatomy of a child’s lungs and other components of the pulmonary (respiratory) system make treating pediatric lung disease a very specialized practice. Children are unique and affective treatments and approaches need to be as well. For more information about pediatric respiratory disease please submit an online appointment request or contact the office of Dr. Peter N. Schochet.

About Pediatric Pulmonologists: Pediatric pulmonologists Dr. Peter Schochet and Dr. Hauw Lie, are dedicated to the care of infants, children and adolescents with acute or chronic respiratory disorders. Our highly knowledgeable staff provides evidence based medical care to patients from the Plano area and throughout North Texas. Our practice has a … END_OF_DOCUMENT_TOKEN_TO_BE_REPLACED

Dr. Schochet's interest in diving has led him to assisting young divers with asthma. He understands that divers with asthma are more prone to diving mishaps. This is why it is important for asthmatics to have their medication regimen evaluated and have physical exams prior to going on diving trips. Although he doesn't treat diving illness, he is an … END_OF_DOCUMENT_TOKEN_TO_BE_REPLACED

The prevalence of pediatric asthma has leveled off except amongst the poor children.  The overall … END_OF_DOCUMENT_TOKEN_TO_BE_REPLACED