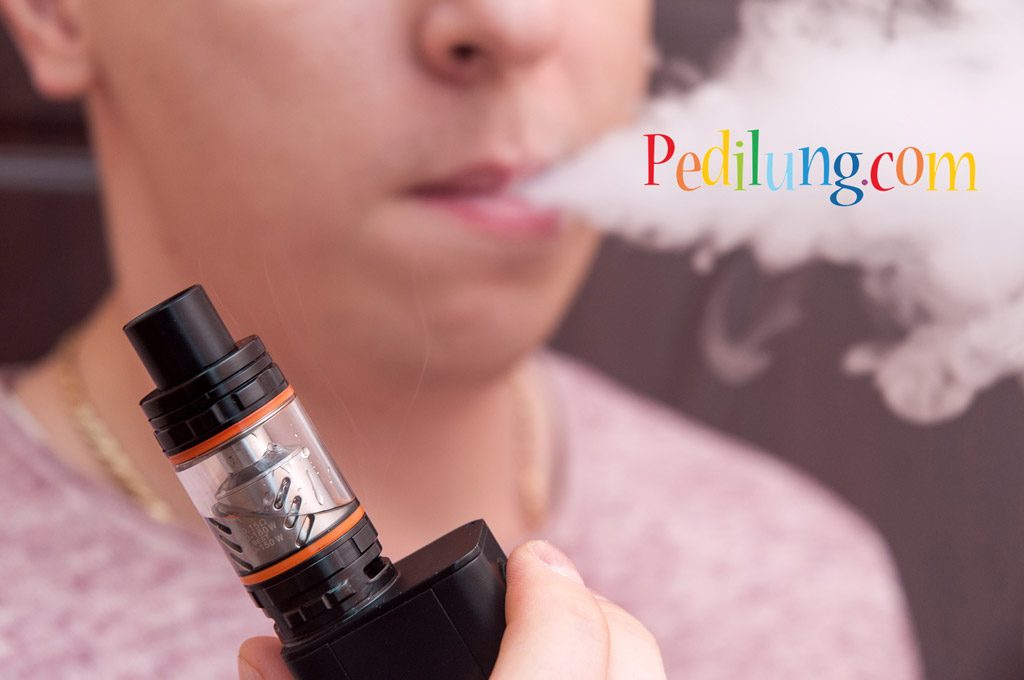 The dangers of teens vaping e-cigarettes is a serious issue being addressed by our pediatric pulmonologists in Plano, Dr. Schochet and Dr. Lie, as the number of adolescents and teens using electronic nicotine delivery systems (ENDS) has risen at an alarming rate in recent years. A Surgeon General report found that vaping among middle school and high school students increased 900 percent between 2011 and 2015. With these statistics, it is important for both parents and teens to understand the dangers involved with vaping.

Vaping (short for vaporization) is the inhaling and exhaling of the aerosol that is produced by e-cigarettes. E-cigarettes are electronic smoking devices (usually battery powered) that produce vapor by heating an inner refillable cartridge containing a liquid. The fluid (e-liquid) used in e-cigarettes typically contains nicotine and other chemicals and comes in various flavors, such as peach, vanilla, cotton candy, and other sweet tastes that make them attractive to young users.

Other commonly used names for e-cigarettes include:

E-cigarettes can look similar to a regular cigarette, cigar, or pipe. Others look much like a writing pen. One of the latest e-cigarettes marketed (the Juul) looks similar to a flash drive and can be plugged into a computer’s USB port to recharge. Because of the different slang terminology commonly used, many young people are unaware they are actually using e-cigarettes because they have never referred to them by that name.

What Are The Dangers of Teens Vaping E-Cigarettes?

While e-cigarettes do not burn tobacco, they are considered to be a tobacco product because most of the devices deliver nicotine (which is extracted from tobacco and extremely addictive) into the body. Most e-cigarettes contain 1/3 to ½ the nicotine of a regular cigarette. Nicotine has been found to have adverse effects on the adolescent brain, which continues to develop until about age 25. Adolescent nicotine use has been connected to lasting behavioral and cognitive impairment, including memory and attention problems.

Using nicotine over an extended period of time can contribute to stomach ulcers, blood clots, and heart disease, as well. Nicotine is not only unhealthy, but if ingested in large doses can be toxic.

Other Chemicals in E-Cigarettes

Researchers from Harvard University studying e-cigarettes found diacetyl (a flavoring chemical) in most of the e-liquids that were tested. Diacetyl is a chemical used in food manufacturing that produces a buttery taste. High diacetyl exposure has been linked to respiratory illnesses such as:

Because e-cigarettes have become popular only in about the last 10 years, more research needs to be conducted, so there is much we do not know. Studies have shown e-cigarette vapor to contain known carcinogens as well as toxic chemicals, such as formaldehyde, benzene, and acetaldehyde. Some e-liquids have been found to contain chromium and nickel, which is believed to be produced from heating the coils in the device. These ultrafine particles can be inhaled deep into the lungs during vaping.

In a review of 18 different e-cigarette vapor studies, researchers found that most of the vapors contained traces of solvents or lung irritants that can transform into carbonyls which can break down at higher temperatures – the kind of high temperatures that e-cigarettes are being modified to reach. The concern comes when these compounds make their way into the lungs and become deposited into their small airways.

Some of the chemical flavorings in e-cigarettes have been categorized as GRAS (generally recognized as safe) by the FDA. Unfortunately, these designations are based on ingestion and not on inhalation.

The Centers for Disease Control and Prevention (CDC) has reported a rapid increase in calls involving e-liquid poisoning. Most of these calls were due to accidental ingestion of e-liquid or the e-cigarettes themselves, however approximately 1/6 of the incidences have been from the normal inhaling of e-cigarettes. Ingesting e-liquid containing nicotine (acute e-cigarette poisoning) has caused at least one death of a child in 2014. Nicotine exposure to the eyes and skin have also been reported to the CDC.

Marijuana Use in Vaping E-Cigarettes

Due to the odorless nature of vaping, e-cigarettes are also being used to inhale marijuana oil and wax, which contain higher concentrations of THC than the actual plant when smoked as a regular cigarette. In addition, the extraction process is unregulated, so the strength of the marijuana oil product purchased can vary greatly. Using e-cigarettes to inhale marijuana carries with it, not only the dangers of vaping, but the additional concern of THC poisoning and the other health risks associated with marijuana.

How Common is Vaping E-Cigarettes Among Teens?

E-cigarettes are the most common form of tobacco among U.S. youth. In 2015, over 3 million middle school and high school students reported using e-cigarettes. That same year, the US Surgeon General reported that 5.3% of middle-schoolers and 16% of high-schoolers nationwide have been vaping e-cigarettes in the past 30 days.

In 2016, the Surgeon General issued a report concerning vaping e-cigarettes which included these points:

This drastic increase in teen vaping has been credited to:

Although vaping is often claimed to be “healthier” than smoking regular cigarettes and touted as a means to quit smoking, the availability to teens and the marketing of sweet, tasty flavors appears to be drawing more and more new young users to e-cigarettes. Early evidence also suggests vaping may ultimately lead to teens graduating to other tobacco product use.

Talk to Your Kids About Vaping E-Cigarettes

If your child is vaping, you have questions about vaping, or you would like more information about e-cigarettes, contact our pediatric pulmonary specialists. Please submit an online appointment request or contact the office of Dr. Peter Schochet and Dr. Hauw Lie at 469-303-8410.

About Pediatric Pulmonologists: Pediatric pulmonologists Dr. Peter Schochet and Dr. Hauw Lie, are dedicated to the care of infants, children and adolescents with acute or chronic respiratory disorders. Our highly knowledgeable staff provides evidence based medical care to patients from the Plano area and throughout North Texas. Our practice has a … END_OF_DOCUMENT_TOKEN_TO_BE_REPLACED

Dr. Schochet's interest in diving has led him to assisting young divers with asthma. He understands that divers with asthma are more prone to diving mishaps. This is why it is important for asthmatics to have their medication regimen evaluated and have physical exams prior to going on diving trips. Although he doesn't treat diving illness, he is an … END_OF_DOCUMENT_TOKEN_TO_BE_REPLACED

The prevalence of pediatric asthma has leveled off except amongst the poor children.  The overall … END_OF_DOCUMENT_TOKEN_TO_BE_REPLACED